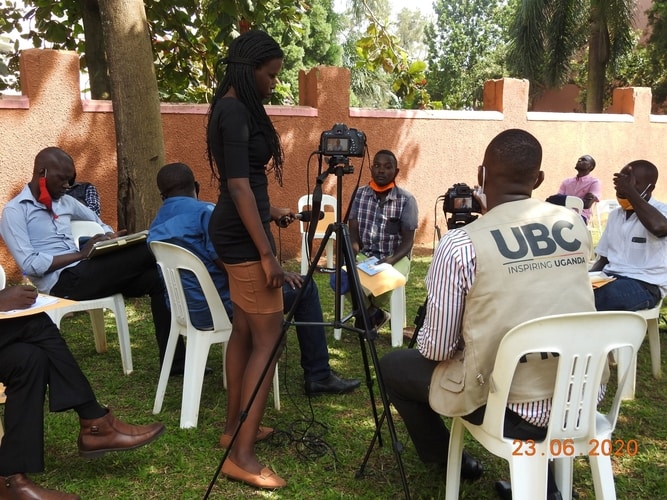 The Africa Centre for Energy and Mineral Policy (ACEMP) has called upon the government to fast track the passing of the Mining and Minerals Bill, 2019 into a law to address ongoing controversies and human rights abuses among the Artisanal and Small Scale Miners (ASMs) in Uganda, particularly those involved in gold mining.

The bill seeks to consolidate the laws relating to mineral resources, reform the outdated Mining Act, 2003, and provide for administrative and institutional reforms for better governance and management of the Mining Sector.

During a press conference organised for ASMs to discuss ongoing illegalities in Uganda’s mining sector on 23rd June 2020 in Kampala, ACEMP’s Executive Director Mr Don Binyina asked that, in addition to fast tracking the law, Parliament of Uganda as well as the Office of the Inspector General of Government (IGG), the State House Anti-Corruption Unit and the Uganda Human Rights Commission should investigate the Police Minerals Protection Unit over allegations of corruption, abuse of office, extortion and human rights abuse.

This follows concerns raised by some artisanal and small scale gold miners from Kasanda and Mubende districts over threats, abuse and torture by the Police Minerals Protection Unit officers in a bid to drive them out of the gold mining industry.

The Chairperson of Uganda Association of Artisanal and Small Scale Miners Mr John Bukya said that unless government intervenes, the country stands to lose incomes from gold mining since illegal mining has carried on under the watch of Police.

Hon Francis Mwijukye, Member of Parliament for Buhweju County and a member of the Natural Resources Committee of Parliament said that, as legislators, they are disempowered when it comes to holding some leaders of the mining sector accountable.

‘We have passed the National Local Content Bill, 2019 to deal with such issues but it is sad that we are still seeing international companies disempowering locals. We also pledge to expedite the Mining and Minerals Bill, if it is brought before Parliament but such laws can only operate if the bodies and people implementing them do not have vested interests. We do not want leaders who are part of the problem’, Hon. Mwijukye said.

At the Citizen’s Convention on Mining in Uganda organised by Global Rights Alert, Action Aid International Uganda (AAIU), Advocates Coalition for Development and Environment (ACODE), Uganda Association of Artisanal and Small-Scale Miners (UGAASM) and the Ministry of Energy and Mineral Development(MEMD) in September 2019; a cross section of artisanal and small-scale miners raised similar concerns. In response to the concerns, Mr Moses Karakire Musinguzi, Assistant Inspector of Police and Head of Operations in the Police Minerals Protection Unit denied the allegations and noted that if there are any police officers involved in illegal mining activities, they should be reported to Professional Standards Unit of Police or courts of law, because those mistakes are individual but not institutional. See (https://oilinuganda.org/features/social-impacts/police-minerals-protection-unit-accused-of-illegal-mining/