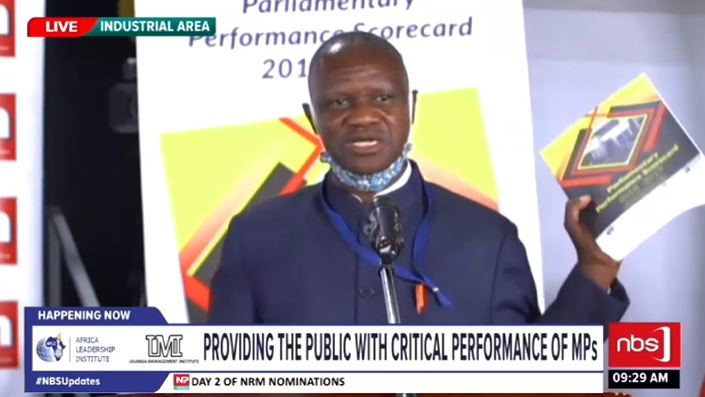 The scorecard seeks to provide Ugandans with critical information on the performance of their members of parliament (MPs) so that they are able to monitor their elected representatives and to make informed choices at election time. This is part of AFLI’s ongoing project titled: "Parliamentary performance scorecard and civic engagement", funded by the DGF.

Under this initiative, performance of individual MPs was assessed at different levels including plenary sessions, various standing and sessional parliamentary committees, and their constituencies during the third session of the 10th Parliament that covers one year.

Out of the 459 MPs assessed, the scorecard ranked Hon. David Bahati, Ndorwa County West MP and also the State Minister of Finance for Planning, as the best performing MP (99.34%); Hon. Betty Aol Acan, Gulu Municipality MP and also Leader of Opposition in Parliament as second (95.4%) and Hon. Sarah Achieng, Tororo Woman MP and also State Minister for Mineral Development as the third (95.19%).

Speaking at the launch, Hon. David Pulkol, the Executive Director of AFLI, explained that most Ugandans are not aware of the proper roles of their MPs, and in most cases cannot follow the happenings of Parliament. He noted that the scorecard allows citizens to have information on how an individual MP and all MPs performed their legislative, representational, oversight and appropriation roles in a particular year.

Dr. James L. Nkata, the Director General of UMI, noted that as an institution of research, they are very careful not to demonstrate any kind of research that would cause bias. He noted that the scorecard is purely academic, well researched and analysed, and it has brought out what was set out to measure.

Marco De Swart, a Programme and Learning Manager at the DGF, noted that parliament is a key institution to Uganda’s democratic governance, and citizens need to know what it exactly does. This would enable MPs to engage more productively with the people and would offer people an understanding of MPs’ work.

END_OF_DOCUMENT_TOKEN_TO_BE_REPLACED

Mid-term Assessment of the State’s Progress in the Implementation of the Recommendations on HRDs under the 2nd cycle of the UPR
DGF Quarterly Newsletter: July to September 2020
Special Newsletter on DGF Implementing Partners’ Response to COVID-19, Issue 3, July 2020
Press Freedom Index Report 2019
END_OF_DOCUMENT_TOKEN_TO_BE_REPLACED