CDFU Launches “The Future is Now!” Project and a Production Studio

On Friday 28th September, 2018, the Communication for Development Foundation Uganda (CDFU) launched its new project “The Future is Now!” and unveiled a production studio located in Ntinda, Kampala. The event was graced by H.E Henk Jan Bakker, the Ambassador of the Kingdom of the Netherlands and Chair of the DGF Board, as the chief guest.

The “Future is Now!” is a 12 months social and behavioral change communication project, funded by the DGF, which aims at inspiring youth aged 18 -30 years across the country through the Rock Point 256 radio drama series to be responsive in democratic governance.

On behalf of the DGF, H.E Henk Jan Bakker reiterated DGF’s commitment to invest in youth programming considering that Uganda has a young and steadily growing population. He noted that CDFU is among DGF’s implementing partners focusing on the youth, and commended them for the innovative approach of reaching out to the youth through the radio drama series, Rock Point 256, which provides information and promotes debate amongst them. He encouraged CDFU to involve young people as much as possible in the implementation of the project to promote ownership and sustainability; and made a rallying call to all actors in governance to utilise the potential of youth in contributing towards national development.

Prof Winston Muhwezi, the CDFU Board Chair, thanked the DGF for funding the new project and the production studio which will be central in the implementation of the project. He emphasised that the project will be implemented using a social and behavioral change communication approach, and the studio will facilitate recording of the Rock Point 256 drama story lines on the project, which will be relayed in 5 local languages across the country to reach out to youth. He further pointed out that the studio will also contribute to CDFU’s sustainability by eliminating costs on outsourcing recoding services, and generating income by providing recording services to other stakeholders.

Actors and listeners to the Rock Point 256 drama series used the event to share testimonies on the positive changes the drama series has had on their lives. They appreciated that the programme has amplified their voices as youth; equipped them with knowledge and skills to find solutions to their challenges and lead productive lives; and empowered them to demand for service delivery and accountability from their leaders, among others.

The event was attended by CDFU Board members, Rock 256 actors and listeners, development partners, CDFU staff, and representative of other civil society organisations.

Since 2013, DGF has supported CDFU to implement various social and behavioral change communication projects aimed at empowering youth to engage their leaders and hold them accountable.

END_OF_DOCUMENT_TOKEN_TO_BE_REPLACED 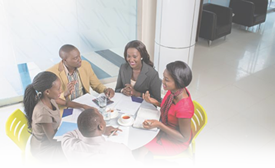