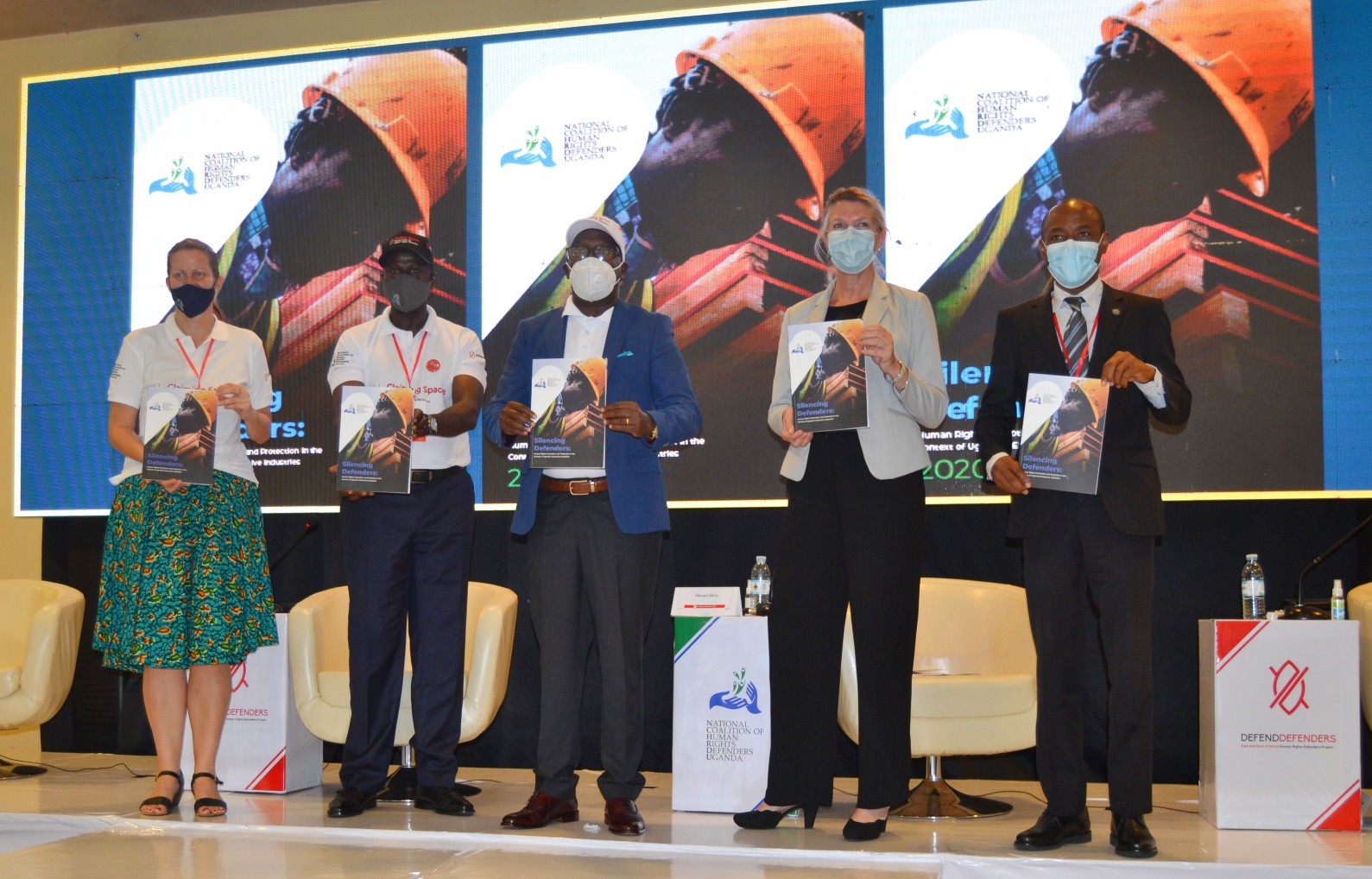 Human Rights Defenders (HRDs) working on a wide range of issues and coming from across the country gathered at Royal Suites Bugolobi for a collaborative five-day engagement with Defend Defenders under their flagship event – Claiming Spaces – held under the theme: “Building Back Better: Human Rights at the centre of COVID-19 recovery effort”.

The report, entitled “Silencing Defenders: Human Rights Promotion and Protection in the Context of Uganda's Extractive Industries”, provides an understanding of the current risks, vulnerabilities and threats faced by human rights defenders (HRDs) working in the petroleum and mining sectors in the Albertine and Karamoja regions respectively.

Speaking at the event, Robert Kirenga, Executive Director of NCHRD-U, noted that their advocacy has been focused on ensuring that the legislative operating environment is improved by seeking to have a specific piece of legislation to acknowledge the work of HRDs and to protect them.

“I wish to report that the seven years of joint advocacy on the need for this specific legislation that seeks to protect the work of Human Rights Defenders is now taking shape. We are pleased that the Human Rights Defenders Bill came to the floor of Parliament in October 2020,” said Kirenga, further adding, “It’s been a concerted effort and we must continue to rally all human rights defenders until the bill is passed into law.”

Speaking as the guest of honour, H.E Karin Boven, Ambassador of the Netherlands to Uganda, emphasized the crucial role played by HRDs for the promotion and protection of human rights. She noted that HRDs are critical for communal and property rights, for participation, and for a clean and healthy environment, and thus need to be strengthened to face powerful actors.

On her part, Nicole Bjerler, the Head of the Democratic Governance Facility (DGF), expressed appreciation to NCHRD-U and other partners for the great work done in supporting and advocating for the protection of HRDs, including with regard to HRDs engaged on human rights concerns arising in the Uganda’s extractive sector.

Delivering the keynote address under the theme “Uganda: Critical Role of Human Rights Defenders in the Electoral Process”, Dr. Donald Rukare, Chief of Party, USAID Rights and Rule of Law, noted that being an HRD is not a 9am to 5pm job, but rather one that is taken on out of commitment despite various pitfalls and obstacles. “These challenges should not deter us from fighting the good fight,” he noted, adding that a violation against one, is a violation against all. He noted that a multi-pronged approach is needed to bring on board all stakeholders, including those from Government, to advance the promotion and protection of HRDs.

On his part, Robert Ayeda Kotchani, Country Representative of the Office of the United Nations High Commissioner for Human Rights in Uganda (OHCHR), emphasised that the respect for human rights across the spectrum, including economic, social, cultural, and civil and political rights, will be fundamental to the success of the public health response and recovery from the COVID-19 pandemic.

The NCHRD-U report, which was undertaken with support from the DGF, can be accessed here: https://hrdcoalition.ug/wp-content/uploads/2020/12/Silencing-Defenders-2020-Report.pdf

END_OF_DOCUMENT_TOKEN_TO_BE_REPLACED

DGF Annual Report 2019
Mid-term Assessment of the State’s Progress in the Implementation of the Recommendations on HRDs under the 2nd cycle of the UPR
DGF Quarterly Newsletter: July to September 2020
Special Newsletter on DGF Implementing Partners’ Response to COVID-19, Issue 3, July 2020
END_OF_DOCUMENT_TOKEN_TO_BE_REPLACED