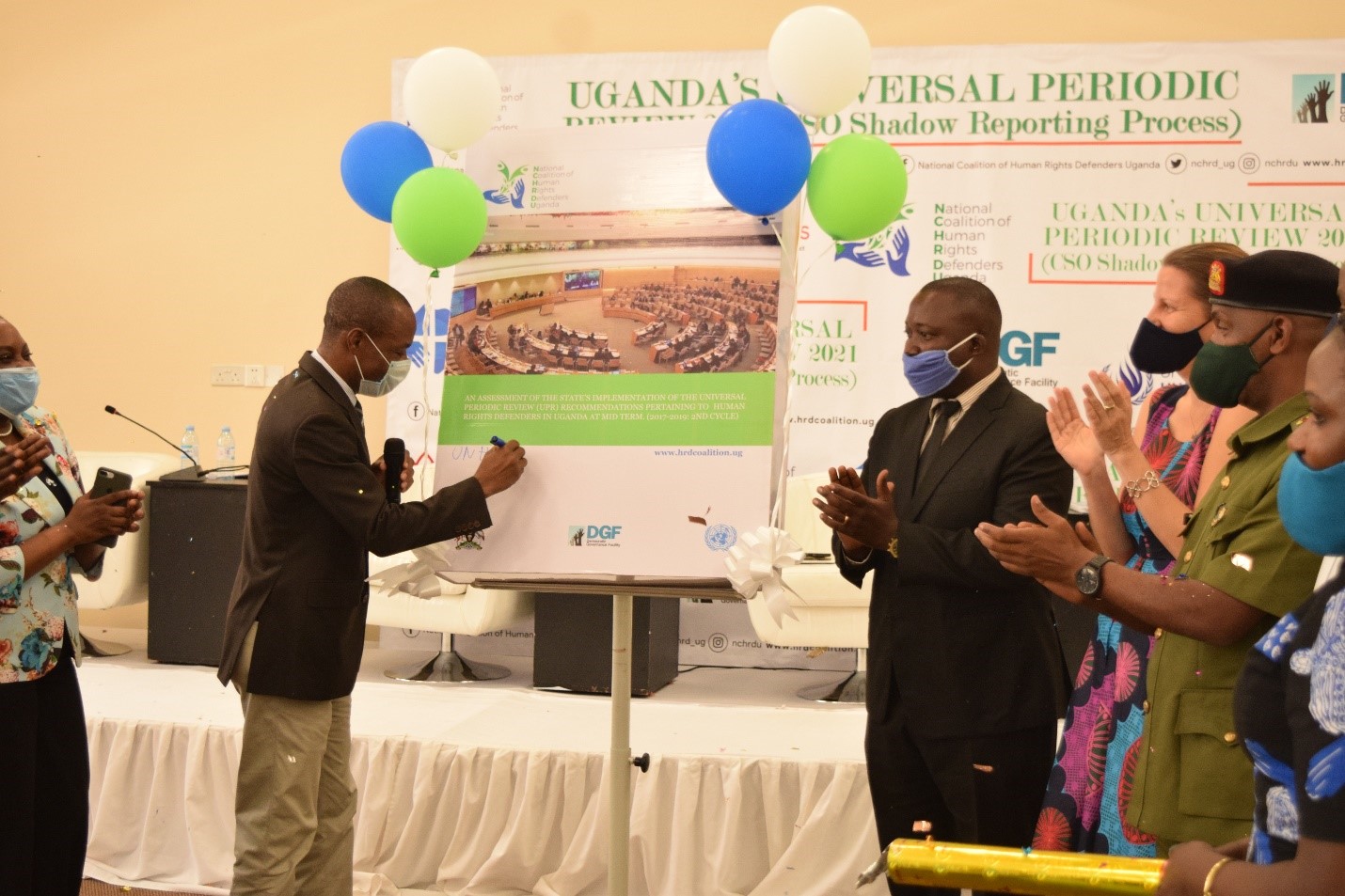 On Tuesday, 6th October 2020, the National Coalition of Human Rights Defenders, Uganda (NCHRD-U), launched a report on the mid-term assessment of the State’s progress in the implementation of the recommendations on human rights defenders (HRDs) in Uganda under the second cycle of the Universal Periodic Review (UPR) at Protea Hotel in Kampala.

UPR is a unique mechanism through which the Human Rights Council in Geneva assesses the human rights situation in 193 United Nations Member States on their human rights performance. States are reviewed every five years based on information provided by the State, by national human rights institutions, civil society organisations and the UN system. Recommendations are given that States are expected to implement before the next review. Uganda has so far undergone the review twice (2011 and 2016) and is up for the next consideration in 2022.

After its second cycle review, Uganda received 228 recommendations, accepted 148 and noted 78. It is against this background that the NCHRD-U commissioned a nation-wide study to ascertain the progress registered by the Government of Uganda at implementing the recommendations on HRDs, including, if any, aspects of retrogression as well as challenges faced, and suggest possible recommendations to the government to fully implement the pending recommendations before the third cycle review.

While officially launching the report, Mr. Robert Ayeda Kotchani, Country Representative of the Office of the United Nations High Commissioner for Human Rights in Uganda (OHCHR), emphasised the role of civil society as an integral and crucial element of the UPR reporting process. He also stressed the importance of providing genuine and factual information on the state of human rights.

On her part, Ms. Nicole Bjerler, the Head of the Democratic Governance Facility (DGF), noted that as recognised in the 2030 Agenda for Sustainable Development, HRDs play a key role in advancing development of our societies, including promoting human rights, gender equality and access to justice.

She also appreciated the presence of numerous civil society at the launch of the report, saying that, “Your collective assessment of the status of recommendations is an essential component of the UPR process. By joining your voices, your messages will be heard more clearly in Geneva by those participating in the UPR consideration of Uganda.”

Assistant Commissioner of Police James Kusemererwa, the Head of Human Rights Department at the Uganda Police Force, noted that the Police does not condone human rights violations, and encouraged HRDs, as they go about their work, to follow all the principles required. On his part, Lt. Col. Deo Karikona, the Director of Human Rights at the Uganda People’s Defence Force, noted that the Force has intensified on sensitisation of human rights, including on the Prevention and Prohibition of Torture Act, among its officers through training and awareness creation sessions. He encouraged HRDs to report any cases of human rights violations by the Force’s officers.

The report launched by the NCHRD-U makes several recommendations among which include: the government of Uganda should expedite the adoption, launch and dissemination of the National Action Plan on Human Rights; the Constitution should be translated into local languages as directed by the Constitution itself; the existent linkages and coordination platforms of the various regional HRDs should be strengthened to enhance information flow and sharing among them; and the capacity of the HRDs should be enhanced in documentation capacities especially in cases that require evidence-gathering that goes beyond undertaking interviews.